On August 27, 1956, the Executive Yuan promulgated the ten professional responsibilities of the MJIB. Among the responsibilities, the sixth function on the “Elimination of narcotics” and the tenth function on the “Investigative and preventative matters specifically instructed by superior authorities,” formed the legal basis for the Bureau's to fight against drug-related crimes.

In view of the deteriorating drug-related crimes in Taiwan, the Executive Yuan declared a “War against Drugs” on May 12, 1993, in attempt to effectively curb drug offenses, ensure public order, and maintain the well-being of the national populace. In response to this directive, the “Drug Enforcement Center” was established on April 1, 1994 by the MJIB upon receiving approval from the Executive Yuan. Later on October 30, 1998, the Executive Yuan amended the functions of the MJIB to be nine functions. In particular, the fifth function on “Drug prevention matters” explicitly stated that drug prevention was a legally-mandated responsibility of the Bureau. Furthermore, the ninth function was modified with wording into “investigative and preventative measures related to national security and national interests specifically instructed by superior authorities.”

On December 19, 2007, the President announced the amendment of the “Organizational Regulations of the Ministry of Justice Investigation Bureau” and the name of the law was changed to “Organizational Act for Investigation Bureau, Ministry of Justice.” The second statute of this law established 20 professional responsibilities for the MJIB, of which the sixth item was “Drug Prevention” and the twentieth item was “Investigative and preventative measures related to national security and national interests specifically instructed by superior authorities.” The “Drug Enforcement Division” also was set up as the legal basis for the bureau's efforts to prevent drug-related crimes.

The Ministry of Justice amended and promulgated the “Ministry of Justice Investigations Bureau Service Procedures” on October 17, 2008. In particular, Subparagraph 4 of Paragraph 1 of Article 4 stated that the Drug Enforcement Division shall be established to include 3 sub-divisions. Provisions of Article 8 prescribed the responsibilities of the Drug Enforcement Division as follows:

2. Guidance and review on the investigation of drug-related crime cases.

3. Exchange of criminal intelligence, coordination of contact, and cooperation regarding case investigations with domestic and foreign drug enforcement organizations.

6. Studies regarding the prevention of drug-related crimes.

7. Compilation of annual reports and manuals for drug enforcement.

8. Other matters related to drug prevention and control.

The Drug Enforcement Division now has one Director who takes charge of the overall management of operations, one Deputy-Director to assist the Director in managing operations, and two committee members. There are three sections under the Division. The division of operations is described as follows:

(1)Cross-border Investigation Section: Responsible for working with foreign drug enforcement agencies in the investigation on matters related to drug crimes.

(3)Control Research and Analysis Section: Responsible for the custody and handling of drug seizures as well as relevant operations, such as work archival, statistical compilation, research, analysis and application.

Furthermore to strengthen the mobility of the bureau in fight against drug-related crimes, specialist teams and dedicated personnel have been drawn from various investigative branches, stations and mobile work stations commit in the prevention of drug-related crimes in terms of clue finding, investigation and prosecution.

The Bureau’s Forensic Science Division undertakes affairs such as the testing on drugs and emerging drugs of abuse, drug laboratories, urine test for drugs, and hair test for drugs as well as relevant technical consultation and R&D work. The division is the first drug laboratory in Taiwan certified by ISO/IEC 17025 Laboratory Certification and accredited by 153 certification bodies from 102 economies. The laboratory is also known as the Bureau’s Drug Abuse Laboratory and the biggest special drug testing agency with most diverse testing capacities and most case handling capacity. 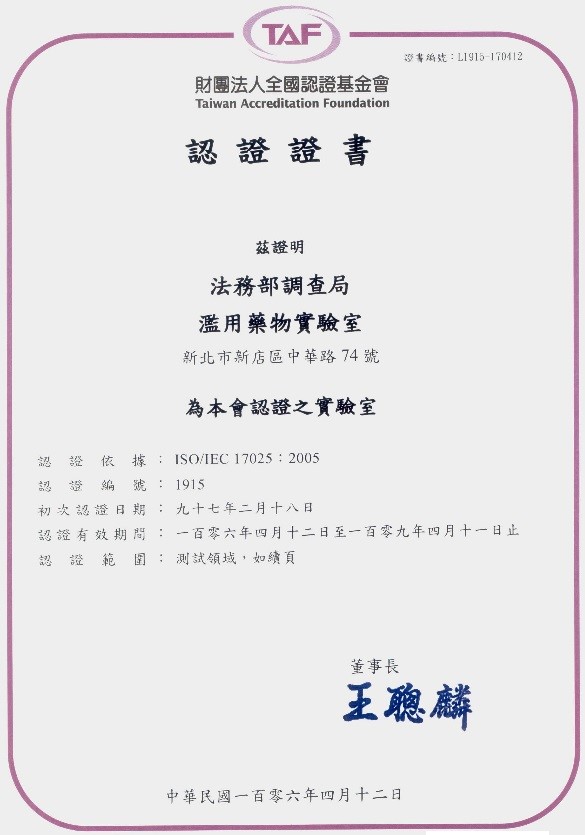 TAF (Taiwan Accreditation Foundation) is a member of International Laboratory Accreditation Cooperation, which forensic results are concurrently recognized by the ILAC members.