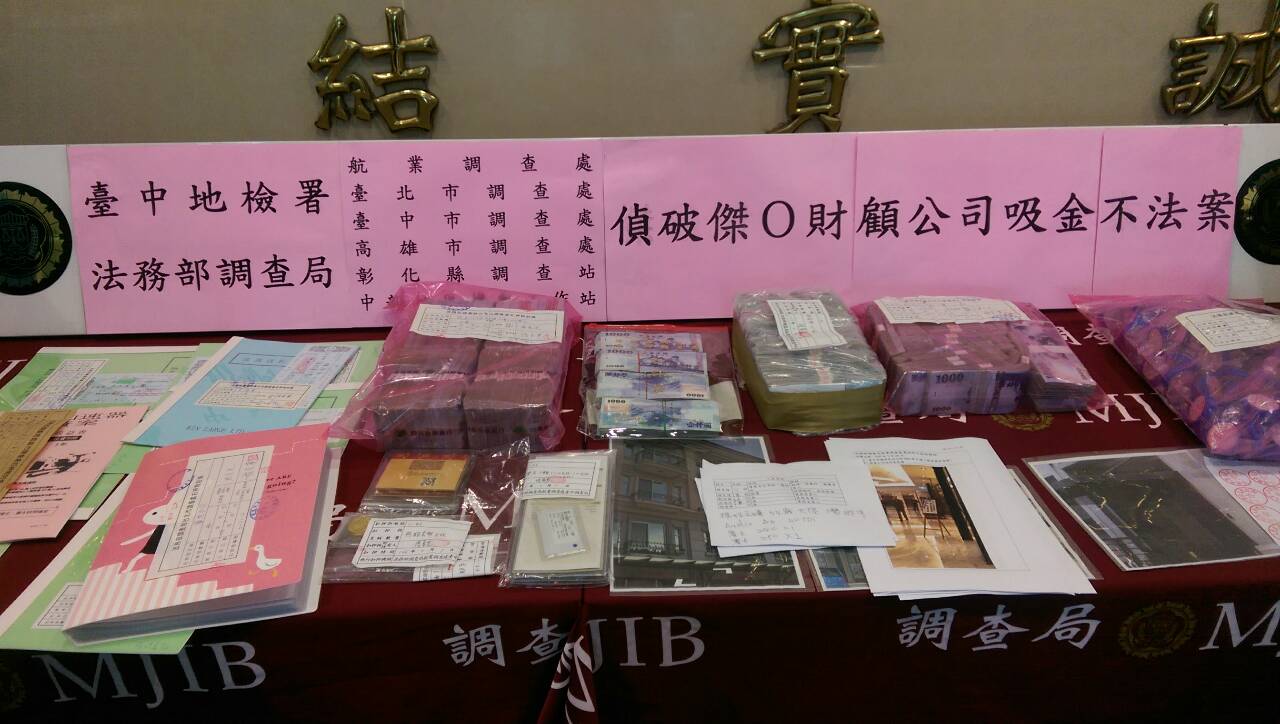 The Prevention and Investigation of Economic Crime Yearbook, 2007

The Prevention and Investigation of Economic Crime Yearbook, 2008

The Prevention and Investigation of Economic Crime Yearbook, 2009

The Prevention and Investigation of Economic Crime Yearbook, 2010

The Prevention and Investigation of Economic Crime Yearbook, 2011

The Prevention and Investigation of Economic Crime Yearbook, 2012

The Prevention and Investigation of Economic Crime Yearbook, 2013

The Prevention and Investigation of Economic Crime Yearbook, 2014

The Prevention and Investigation of Economic Crime Yearbook, 2015

The Prevention and Investigation of Economic Crime Yearbook, 2016

The Prevention and Investigation of Economic Crime Yearbook, 2017

The Prevention and Investigation of Economic Crime Annual Report, 2018

The scope of economic crime prevention may be classified into economic crimes and ordinary crimes. Collection of information, research and analysis, investigation and prevention of such crimes consist generally of the following:

Convening of Board on Economic Crime Prevention

In May 1979 the Executive Yuan formulated specifically with regard to the existing status of economic crimes, financial measures and major cases, effective prevention policies with a view to comprehensively prevent economic crimes. The Executive Yuan also directed the Bureau to liaise with relevant units with regard to the formation of special project team convened the "Board on Economic Crime Prevention" ("the Board"). The Board's composition underwent several changes over time. At present its members (13 government authorities) consist of: Fair Trade Commission, Financial Supervisory Commission ( "FSC", including Securities and Futures Bureau, Banking Bureau, Insurance Bureau, and Inspection Bureau), Ministry of the Interior (National Police Agency and National Immigration Agency), Ministry of Foreign Affairs (Bureau of Consular Affairs), Ministry of Economic Affairs (Department of Commerce and Taiwan Intellectual Property Office), Ministry of Justice (Department of Prosecutorial Affairs, Taiwan High Court Prosecutor's Office and Investigation Bureau). In addition to conduct economic crime prevention work according to their respective roles, Board members also periodically convene meetings. Such meetings are chaired by the Director of the Bureau, with officers from the Executive Yuan, Judicial Yuan and National Security Bureau attending as observers.

The Board's functions include:

(I)    Combining financial and economic, judicial and foreign affairs powers to effectively combat economic crimes as an integrated body.

(II)    Collecting information on economic crimes through the Board as a platform, in order to take preemptive prevention measures.

(IV)    Examining the pros and cons of existing financial policies and economic measures in order to showcase government authorities' participation in improvement.

(I)     The Board implements its work in conjunction with government policy. Such work include "stabilization of prices and discouragement of hoarding and causing prices to rise"

1.         To strengthen its ability to combat criminal activities that affect everyday life and thus to remove fear from ordinary citizens, the Board has formulated "Implementation Plan of Prosecution Authority on Projects Combating Economic Crimes" and "Guidelines on Implementation Plan of Taiwan High Court Prosecutor's Office on Economic Crime Projects". It has also, since the formation on November 5, 2007 of the Materials Price Project team, requested all field offices and stations to report on instances of hoarding and artificially raising prices. The Board has also worked with competent authorities with respect to administrative inspection.

2.         Beginning on December 6, 2011 the Board has assumed the role of the Executive Yuan's "window for lodging complaints on hoarding of goods", with toll-free number 0800-007-007 as the complaint hot-line. For the purpose of increased exposure, the Board has in addition to coordinating dissemination of information by members of the "Executive Yuan Price Stabilizing Team", also carried out posting of on-line articles on outside networks, conducting joint-promotion at the respective field offices and stations and coordinating propaganda by public and private units.

(II)    Compilation of annual report on its economic crime prevention work, topical research reports and establishment of archives for ease of reference during investigation

1.  With regard to existing economic situation, irregular economic activities, new type of economic crimes and key industrial and commercial enterprises in poor financial operating status, the Board takes the initiative to compile annual report on economic crime prevention work and topical research reports to study preventive measures for reference by superior or relevant authorities. For completed cases the Board also conducts in-depth discussion and examines the possibility of administrative oversight or legal loopholes as well as possible causes for such crimes. It then proposes specific improvements in order to prevent recurrence of such cases.

2.  The Board establishes on a sustained basis, an electronic archive for information on new-style of major economic crimes for reference during prevention and investigation.

1.       The Board seeks to gain in-depth understanding of the financial operations of major domestic enterprises and financial and insurance institutions which incur serious operating losses and which face financial crisis in order to uncover at first hand suspected embezzlement of funds by insiders, draining of corporate funds or involuntary winding-up.

2.       The Board seeks to strengthen its ability to give advance warning of insider trading, rigging of share price, and irregular settlement by listed or OTC companies or specific individuals using the stock market, or use by foreign (Mainland) enterprises and financial institutions of financial derivatives to conduct irregular stock or foreign exchange market operations or those involving real estate.

3.       The Board uses all types of database to establish a complete work-flow process for selected inspection of large-amount bill-return by companies and businesses. It then derives from its analysis, key groups and suspected check-sale groups and forwards them to field units for further investigation.

The Board periodically hosts discussion forums on prevention of economic crimes. With respect to economic crimes completed and problems uncovered during collation of financial and economic information, the Board invites experts and academics in relevant fields and prosecutors as well as officers from competent authorities to speak on forums, conduct in-depth analysis of causes, administrative oversights and regulatory loopholes etc. as well as response measures and recommendations for improvement. The Board consolidates all relevant information and submits its views to superior and competent authorities for reference.

(V)   Promotes exchange of anti-corruption experience by enterprises and establishes liaison window and assists in promotion of corporate governance
The Bureau and its field offices and stations conduct sustained exchange of anti-corruption experience with enterprises through visits to enterprise groups, science and hi-tech industrial parks and industrial and commercial organizations and societies, and assists enterprises in promoting corporate governance. It also establishes liaison windows for stronger partnership between the Bureau and businesses.

"Guidelines of the Investigation Bureau on Determination of Major Economic Crimes" states that:

1.         The following crimes shall be treated as major economic crimes according to the number of victims or the amount of illegal interest involved:

Determination of the aforesaid crimes based on the number of victims and amount involved defers from place to place depending on the local social and economic circumstances. They are set out as follows:

(2)     In all other cases: That there are more than 30 victims or the amount of illegal interest involved exceeds NTD10 million.

2.         The following crimes shall be treated as major economic crimes if the amount of illegal interest involved exceeds NTD2 million:

(1)     Crimes under Article 2 of the Smuggling Penalty Act.

(3)     Crimes under Article 71 of the Business Entity Accounting Act.

(4)     Crimes under Article 22 of the Foreign Exchange Regulation Act.

3.         The following crimes shall be treated as major economic crimes if according to the social circumstances at the time they cause harm to economic growth and damage financial stability:

(18)   Article 38 of the Securities Investor and Futures Trader Protection Act.

4.         Other acts that violate economic control laws and regulations or involve irregular means such as to damage social economic order in a serious manner.

Given that the substance and means of economic crimes continue to evolve along with the society and economic changes with some even attempting to circumvent the law from the outset, careful consideration should be such that one does not limit oneself to the standards for economic crimes. Indeed any criminal activities that are sufficient to damage social economic interest and order or, although in the beginning the amount involved or the number of victims do not meet the prescribed standards, but such acts are likely to spread if not effectively suppressed, should be actively investigated in order to prevent their proliferation at source.

At its 3402nd meeting held on June 12, 2014 the Executive Yuan directed that the Bureau to actively and preemptively prevent corporate corruption and major economic crimes. Following that the Bureau established an Anti-Corruption Section on July 16, 2014 to strengthen its ability to investigate corruption cases. The following sets out the type of crimes involved:

(1)     Manipulation of stock prices (Article 155 of the Securities and Exchange Act).

(4)     Fraudulent placement or issuance of shares (Article 20, paragraph 1 of the Securities and Exchange Act).

(6)     Special breach of trust, and misappropriation (Article 171, paragraph 1, sub-paragraph 3 of the Securities and Exchange Act).

3.         Draining of the company's assets (a company's staff being involved in acts under Article 342 and Article 336 Paragraph 2 of the Criminal Code).

Pursuant to the Presidential Order dated December 19, 2007 under Hua-Zong-Yi-Yi-Zi No. 09600170531 the Organic Act for the Bureau has been revised to contain 20 areas of responsibilities. Paragraph 20 of the said Act ("National security and national interest-related investigations and infrastructure security upon special orders from higher-ranking authorities") crimes which do not come under maintenance of national security, clean governance and anti-narcotics are considered ordinary crimes.

There is an increasing trend of economic crime perpetrators absconding overseas in order to enjoy their illegal gains. If they are not caught and brought to justice they would cause serious damage to justice and reputation of public authorities. In May 1984 at the 26th Meeting of the "Board on Prevention of Economic Crimes", a resolution was passed to form a "Coordination Team for Arrest of Economic Crime Fugitives". The Team's composition underwent several changes over time. At present its members include: Ministry of Foreign Affairs (Bureau of Consular Affairs), Ministry of Justice (Department of International and Cross-Strait Legal Affairs), Mainland Affairs Council of the Executive Yuan, Ministry of the Interior (National Immigration Agency), National Policy Agency (Criminal Investigation Bureau) and the Investigation Bureau, with the Bureau undertaking its secretariat work. The Team combines the powers of the respective authorities and actively conducts the pursuit of economic crime fugitives or plan for their return. The Team has also expanded the scope of responsibility to include fugitives involved in major corruption, drugs, firearms, organized crime and other major criminal cases. Since January 16, 2015 the Bureau began to handle cases involving fugitives in Mainland, Hong Kong and Macao, with their cases being transferred to the Bureau's International Affairs Department for follow up.

(I)       Our Straits Exchange Foundation and the Mainland's Association for Relations Across the Taiwan Straits (ARATS) had on April 26, 2009 entered a "Cross-strait Joint Fight against Crime and Mutual Legal Assistance Agreement", with the said agreement to take effect on June 25 of the same year. Pursuant to the Order of the Ministry of Justice dated August 10, 2009 under Fa-Jian-Zi No. 0980803292, the Bureau was authorized to establish official liaison channels with Mainland China's Public Security Ministry, Supreme People's Procuratorate, Ministry of Justice and the People's Bank of China's Anti-Money Laundering Bureau and Chinese Anti-Money Laundering Monitoring and Analysis Center, with the Bureau's Economic Crime Prevention Department undertaking secretariat work. Where the Bureau's subordinate units are required to conduct cross-border investigation of criminal activities they would be required to seek assistance from the Mainland law enforcement authorities through the Bureau's Economic Crime Prevention Department.

(II)    To maintain national security and protect the people, as well as effectively tackle cross-border criminal activities, thus fostering peace and stability across the Strait, the Bureau had engaged in cooperation and exchanges with law enforcement authorities in the Mainland, Hong Kong and Macao. Periodic visits were conducted annually for the exchange of information, joint investigation of cases, repatriation of convicts and suspects in criminal cases, reception of prison inmates, giving briefing on restrictions on personal freedom of Mainland Chinese in Taiwan, exchange of criminal investigation authentication skills, mutual visits by officers from both sides and convening of academic forums, seminars and conferences, thereby fostering mutual trust, both sides' understanding on joint-action against criminals and liaison channels, as well as enhance their professional ability to investigate cases.